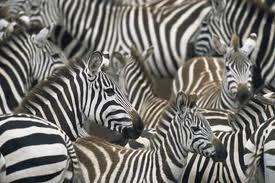 p.12 while reworking VALIS, the idea--not an idea but THE IDEA--suddenly popped fullblown into my mind, having germinated subconsciously over the years. What I call it is the Zebra Principle.

Paige has developed the Zebra Principle: that it is possible, even likely, that high-order mimicry exists, undetected. (1) The mimicking organism is undoubtedly benign; (2) There is no reason to suppose that it mimics humans but rther that it mimics inanimate objects. Houston Paige supposes that there must be tests which can be arranged which will smoke Zebra out (Zebra being their code word for mimicking organisms). Science fiction writers are especially suspected of knowing--of having contact with--Zebra, who, in the minds of the government, has become just one more enemy of the state.
...
Zebra is enormous in physical size, which is one reason Paige never manages to detect it. Zebra, in fact, spans thousands, possibly even millions of miles of our space, having grown very large over the past three thousand years. Paige can't detect Zebra because he is inside Zebra every day of his life.
13 By means of this superimposed theme I can edit out much of the Christian material and bias (as well as the explanation at the end of the novel) which I would like to do. Zebra, if it can be said to resemble the contents of any religion, resembles the Hindu concept of Brahman.
...
The Zebra theme will also enable me to add the elements of black humor which are presently missing from VALIS. We will have a lot of fun with Houston Paige as he constantly encounters Zebra, never realizing it and always drunkenly theorizing as to the nature and location of Zebra. Paige who seeks to apprehend Zebra is denied that very vision, and Phil Dick (in the novel) who has ripped off the tyranny and deoesn't care a shit about Zebra--he just needs the money--gets to finally see it.

One ability Zebra has that Paige doesn't suspect is its capacity to restructure human memory. Every time Paige sets up a test to detect Zebra and obtains positive results, Zebra lays down a false memory template in Paige's head so that he is deluded into thinking the results are negative. This ability to delude is a major aspect of Zebra... Zebra creates what Hindu religions call Maya; it lays a veil over the world so that its enormous plasmatic body cannot be distinguished.
...
Zebra is in fact a non-terrestrial life form which came here to live and grow, but being as benign as it is it aids all life as much as it can. Every now and then, the characters get a glimpse of a dreadful "alternate world" which is just a cruel, crushing prison (represented in the novel already by the visionary encounter with A.D. 70 Rome); this is our world as it would be without Zebra; it allows the characters a glimpse of this non-Zebra world with the purpose of eventually disclosing not only itself to man but what it has achieved for man. Zebra regards the biological and historic forces on this planet as malign, and seeks to ameliorate them. It is finally revealed to one of the characters--probably Phil Dick--what this black iron prison world actually is(or would have been).

p.14 Part of Zebra's ability to disguise itself grows out of its ability to move along a fourth orthogonal spacil xis unknown to us, in fact denied to us; thus Zebr cn appear and disappear at will, without our understanding how.
...
Through the manifesting of Zebra into visibility, Phil Dick in the novel realizes that what has always been called "god" by mankind is in fact merely superior life form.

However, Zebra is so superior that it might as well be god. But it is timid and retiring (like Lord Running Clam in CLANS OF THE ALPHANE MOON), and can be destroyed, although not by us... Part of Zebra's sympathy for man derives from its own vulnerability.